Although most associate the term “sharps” with needles and syringes, any medical device that is sharp and can cut or puncture skin falls under this umbrella and needs to be disposed of as such. Along with needles and syringes, lancets (also called a “finger stick”, commonly used for diabetes treatment), infusion sticks, auto injectors and connection needles classify as “sharps”.

In 2011, the Coalition for Safe Community Needle Disposal reported that 13.5 million people in the U.S. were disposing of 7.8 billion used needles outside their doctor’s office. This data showed that from 2001 to 2011, the number of used needles in the U.S. nearly tripled, jumping from 3 billion to almost 8 billion (not including needles used in veterinary practices or other sharps used outside healthcare settings). Patients often use these multitude of sharps to treat various illnesses and diseases, such as allergies, diabetes, hepatitis, HIV/AIDS, and psoriasis.

When a patient uses one of these sharp medical devices that comes in contact with their blood, there’s a possibility that the viruses in their blood will contaminate the device, and (if not disposed properly) infect the people who handle the device after its’ used. According to the FDA, the most common infections caused by used sharps are Hepatitis B (HBV), Hepatitis C (HCV) and Human Immunodeficiency Virus (HIV).

It may be easy to ‘throw away’ sharps after they’ve been used, but disposing of loose sharps in trash cans and recycling bins or flushing them down the toilet puts janitors, children and others in the household at risk of being injured and infected by the used sharp. In fact, 10 – 20% of needle injuries happen during disposal! This is why it’s important to dispose of sharps (even ones used for your pet’s medication) properly, especially with so many Americans self-injecting their medication at home or on the go.

According to American Nurse Today, many patients who self-inject medication haven’t been given enough guidance about how to safely disposal of their sharps. Many place their used sharps in soda bottles or coffee cans before throwing it in the trash. Then, when the trash is compacted, the container is crushed and the used sharp spills into the conveyor belt. If it gets caught and clogged, sanitary workers must hand pick the used sharp out of the system.

At the very least, patients should to dispose of their sharps in a container that has a lid and is strong enough to keep the sharp from sticking through the side. When thrown away, this container should be placed in the center of the trash and its’ lid should be heavily taped on. These methods, although somewhat effective, are not up to complete protocol with proper disposal of medical sharps—but there are several other options for disposal that do fit the bill.

Several areas have community-based programs, such as Chrysalis Environmental Service’s “Zeedle”, found in the Northeast. Others can use syringe exchanges, offered by the North American Syringe Exchange Network, or purchase needle destruction devices for their home. These devices bend, break or shear needles, but don’t work well for lancets.

One of the easiest methods for proper disposal is a mail back system, where a patient can purchase a sharps disposal container and ship it to a medical waste facility to be properly disposed when it is full. PureWay offers a sharps mail back system for safe transportation and disposal of used sharps, making it less of a headache for patients who need to dispose of their sharps used at home. 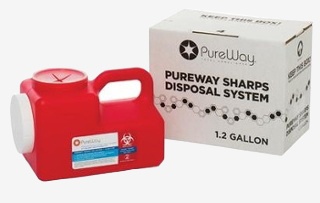 PureWay’s containers are FDA approved and have been tested and approved through the United States postal service (USPS). Better yet, their mail-back system tracks the full life cycle for each sharps container from its’ initial shipment through return and disposal, so all sharps are accounted for and kept from being misplaced and causing injury or harm to others. If you’re looking for a simple, easy way to dispose of your sharps properly, PureWay’s system offers a great solution that not only helps you get rid of your needles, syringes and other sharps, but gives you peace of mind that your disposal method isn’t causing any possible harm to friends, family or your community.